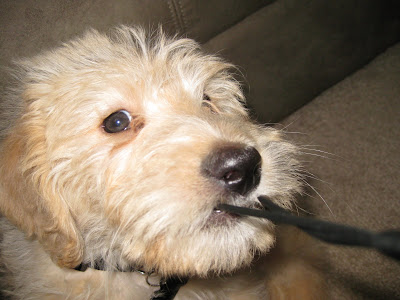 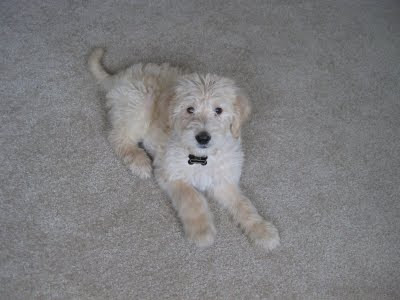 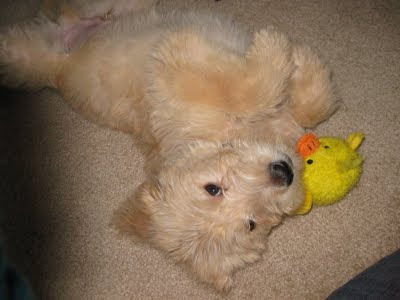 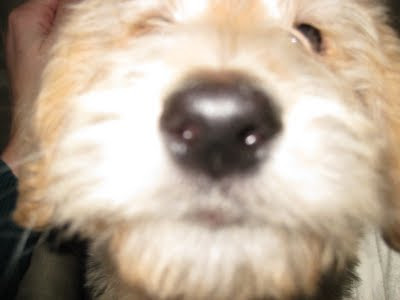 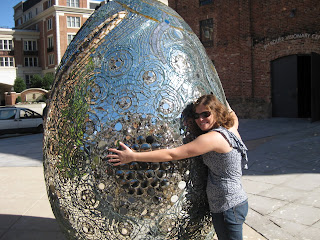 Hi y'all.  I figured it might be a good idea to write a little bit of an update post.  I stopped posting back in May because I got too busy with work.  I also deleted a lot of entries because of a privacy issue that I had, so I figured I could try to fill in some of the blanks :)
That's all I can think of right now!  I hope this catches anyone up who was interested.
Posted by Kara at 8:01 AM 4 comments:

I just had a really great weekend with my parents!  It was the first time that they've been up to see our new apartment since we moved.  The weekend pretty much consisted of eating and shopping-- two of my favorite things :)

They had never been to Lexington Market so we went down there to check it out.  We picked up some sandwiches from Krause's.  I got a Thanksgiving sandwich with turkey, stuffing, and cranberry sauce. 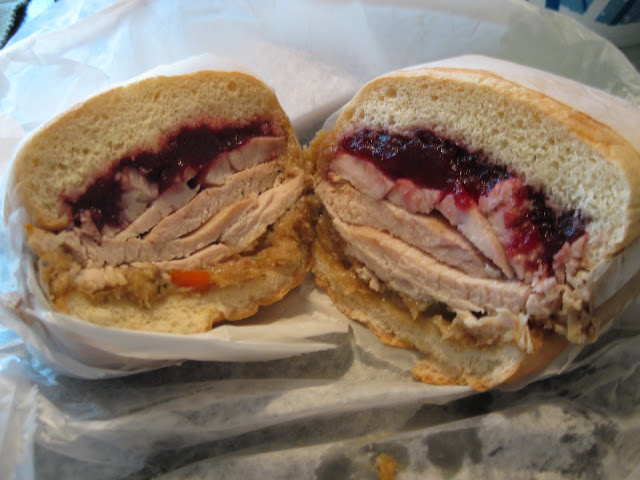 No time like the present to get into the Thanksgiving spirit!  This turkey is really good-- moist and good flavor.  And big!

We also did a lot of puppy shopping this weekend.  My parents were amazing enough to help out the poor graduate students with the puppy supplies.  Check out puppy's new home! 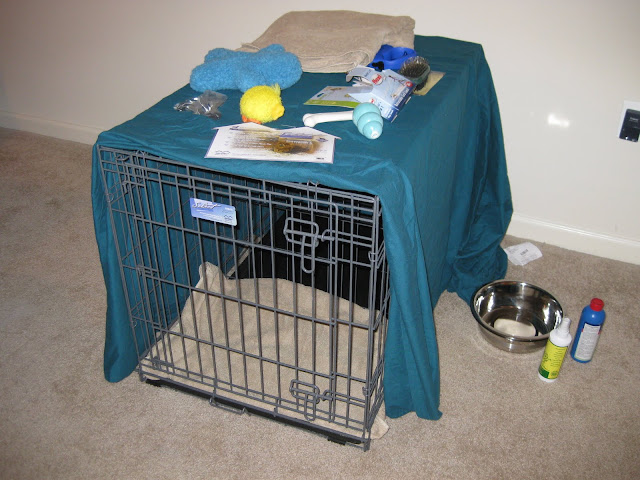 For dinner tonight I made shrimp pot pie.  It was a shrimp, broccoli, and onion base with puff pastry. 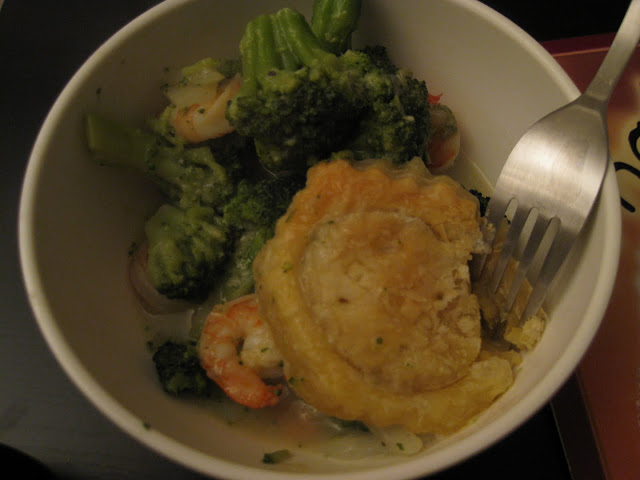 It was alright, but I definitely still had room for Berger cake and milk. 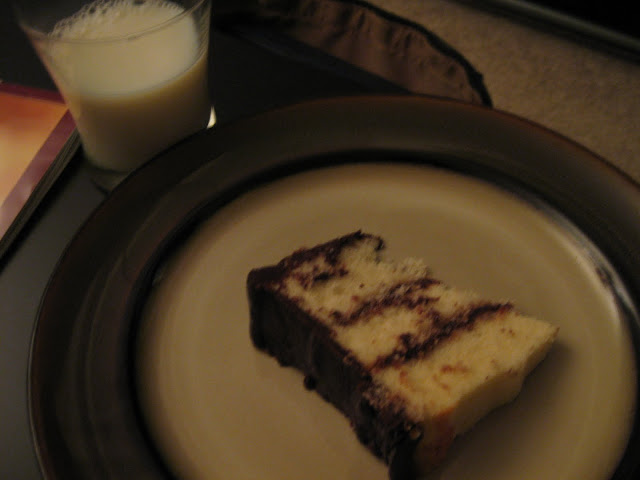 I have a human behavior midterm tomorrow and I'm really not into it.  Getting ready for a new puppy is WAY more exciting :)
Posted by Kara at 10:55 PM 1 comment:
Labels: dinner, eating out, lunch, puppy, sweets

A lot has been going on this week.  Here's a quick clue about an exciting new addition to our home: 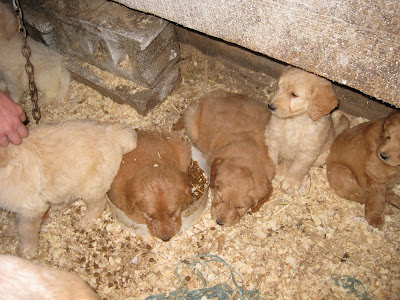 My parents are on their way to visit for the weekend!  So much excitement!
Posted by Kara at 10:59 AM 1 comment:

Ugh.  I used to really like my human behavior class, but it has become a major borefest.  I was so happy to get out of there and home!  I worked out today and it's been a while.  My neck has been acting funny and the workout made it feel really weird.  Not sure what that's about.

Dinner was another one of those meals that I have been making over and over again for the boyfriend.  I based this off of Rachael Ray's recipe in The Big Orange Book, Sloppy Buffalo Joes.  Here's the original recipe.  I modified it so that it I only put in onions, Frank's Red Hot, diced tomatoes, and chicken broth to the ground meat (I used turkey tonight). 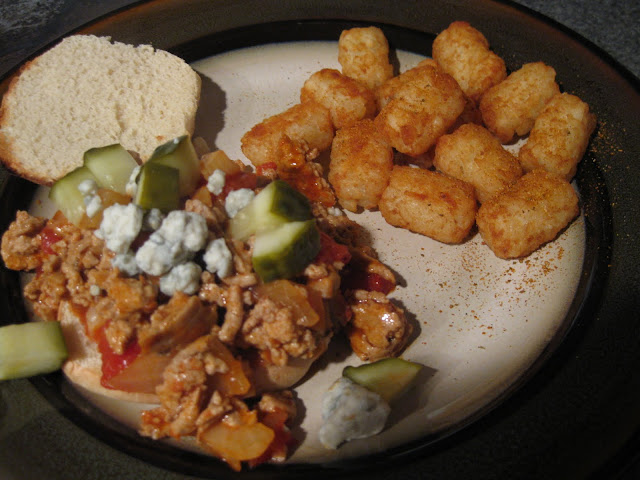 I like putting the chopped up pickles and blue cheese crumbles on top.  Yummy.  I served it with some tater tots with Old Bay, my love.  I also had a few crackers with cheese after my workout.

I'm so used to getting a lot of replies right away when I post, and it's been really slow.  I know this is only my second day back, but I'm trying not to get discouraged.  I want my community back!

I have to be at the hospital in the morning for my internship.  I'll really need to get around to updating everything and everyone with all of my life changes since May!
Posted by Kara at 10:21 PM 5 comments:
Labels: dinner, rachael ray, recipe

(Not so) super soup.

I just got done with my social policy midterm! Woohoo! Now I just need to do a take home midterm for social work practice and study for my research midterm on Wednesday, but those shouldn't be so bad.

This morning I was pretty excited about something that I actually haven't eaten for a long time... oatmeal! I bought some instant kind because these earlier mornings really don't give me time to make regular oats. I am so not used to getting up to be at work/internship at 9! These are maple and brown sugar made with skim milk and I added some walnuts. 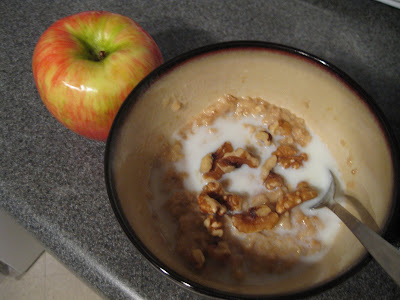 I also had an apple. I like this instant oatmeal because it's natural. And it's Wegman's brand!

So I've been planning on making tortellini soup ever since I had some that was really good at the hospital where I have my internship. I found the recipe that I wanted to base it on and yesterday I got all of the ingredients that I needed at the store. This recipe looks so simple, right? It's just a bunch of stuff all thrown together. Well, it was simple, but when I got it out of the fridge for lunch, this is what I saw: 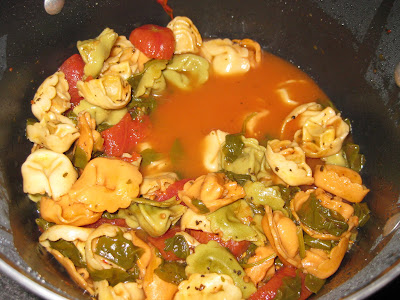 Pretty much all of the liquid got absorbed! I guess it all went into the tortellini. I ladled some out and added some water to it, but it (duh) got really watered down. 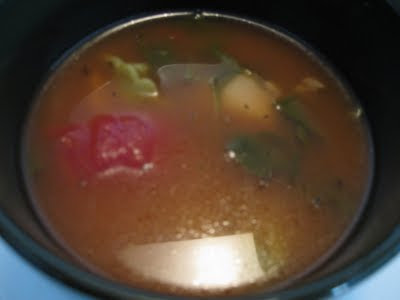 Oh well. I ate the tortellini and some of the veggies out of it. I guess I might try to buy some more vegetable stock and add it as I eat it. Any other suggestions?

Now I'm eating a PB and banana sandwich since that "soup" really didn't do anything for me. 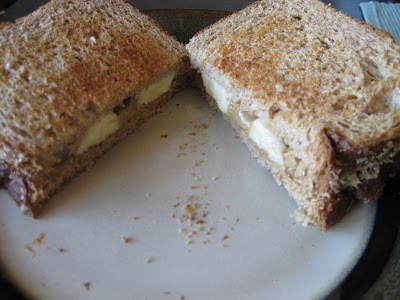 I really want to know: what's the biggest thing that I have missed while Ive been gone? With you, with food trends, with major happenings, or whatever! I want to get back in the loop!!

I have a second class at 2, so I need to get ready to go soon. I hope everyone's day is going well! Monday is almost over!
Posted by Kara at 1:07 PM 1 comment:
Labels: breakfast, lunch, recipe

Back in the game.

I didn't realize how hard it was going to be to get back into the swing of this! I haven't taken food pics in months or had to think about writing. It's very strange. I want to play catch-up and talk about what I've been doing since May, but I think that's going to have to come bit by bit.

We went to see Where the Wild Things Are last night. It was pretty okay. It really wasn't a kids' movie in my opinion. Pretty serious and deep. I'm not really sure how I feel about it, but it was definitely interesting. I slept in this morning and then needed to get up to start studying for the 3 midterms I have this week. Breakfast was a whole wheat english muffin with PB. 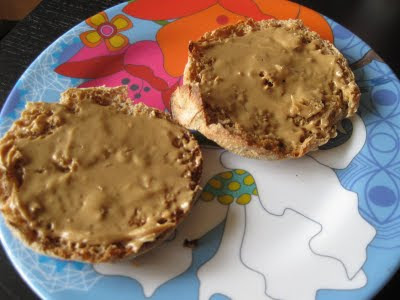 Lunch was leftover from Friday night. I've made this lemon pepper shrimp pasta like 4 times in the past 6 weeks. It's good, but I make it more for G. 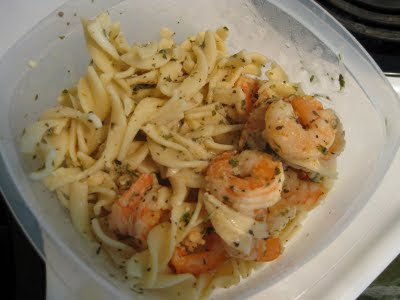 We went for a much needed grocery shop at Wegmans (I love Wegmans!). Loaded up on a lot of stuff. I'm definitely trying to think a little more healthy. I haven't really gotten too bad, but I'd like to get some more fruits and veggies and less artificial stuff. Since we moved, I've been trying to plan dinners out for the week to make shopping a little smoother and less wasteful. So far it's worked pretty well! It's nice to live with another person who will eat the leftovers :)

I was super hungry when we got back from the store. I had some Kashi crackers (sort of like Triscuits) with Laughing Cow. 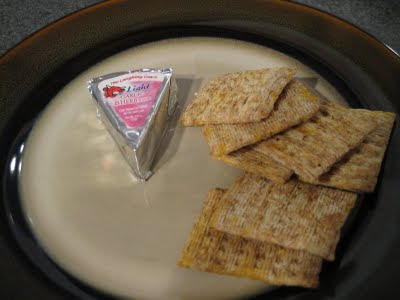 For dinner, I made a recipe that I found in Every Day with Rachael Ray in the November issue called Cheesy Rice Fritters. The recipe that they have has a LOT of cheese and oil, so I cut both in half and used turkey bacon instead of real bacon as the recipe had called for. 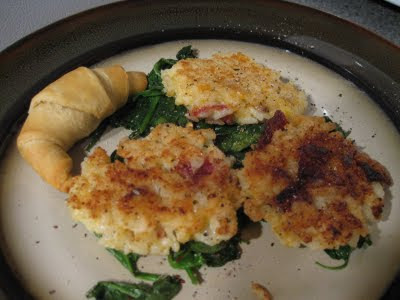 They turned out pretty well! The fritters are served on top of sauteed spinach with red pepper flakes. We also had a couple of little crescent rolls.

My snack was a bowl of dry Raisin Bran Extra. 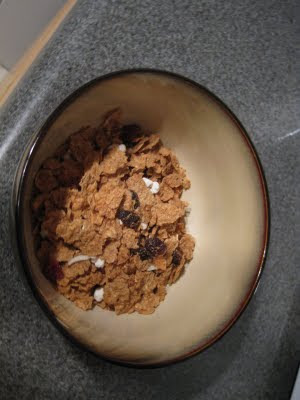 This is an okay cereal, but Raisin Bran really has a lot of sugar and addititives that don't need to be there!

Alright, that felt a little foreign, but it'll all come back to me! Thanks to you guys for sticking with me :)
Posted by Kara at 9:19 PM 2 comments:
Labels: breakfast, dinner, lunch, rachael ray, snack, weekend

Is anyone still there?

Hello to anyone that still subscribes/reads my blog!

I have been on major hiatus for a while (okay, a few months). But I think that I am ready to get back into blogging. I miss the interactions that I have with other bloggers and readers and the nutritional and fitness support that I get from everyone.

I might move to a new domain, but I will let you all know if that happens. For that matter, Im not sure if I even have any readers anymore! This might be starting over from square 1!

I am looking forward to hearing from everyone and can't wait to get back into the swing of things :)
Posted by Kara at 12:33 PM 5 comments:
Newer Posts Older Posts Home
Subscribe to: Posts (Atom)